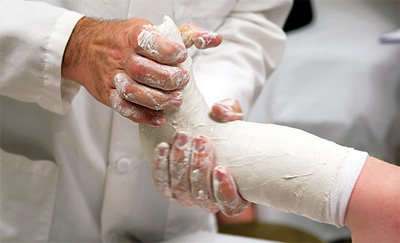 Parents know immediately if their newborn has a clubfoot.  Some will know before the child is born if an ultrasound was done during the pregnancy.  A clubfoot occurs in approximately one in every 1,000 births, with boys slightly outnumbering girls.  One or both feet may be affected.

The appearance is unmistakable:  the foot is turned to the side and it may appear that the top of the foot is where the bottom should be.  The involved foot, calf and leg are smaller and shorter than the normal side.  It is not a painful condition.  But if it is not treated, clubfoot will lead to significant discomfort and disability by the teenage years.

Doctors still aren’t certain why it happens, though it can occur in some families with previous clubfeet.  In fact, your baby’s chance of having a clubfoot is twice as likely if you, your spouse or your other children also have it.  Less severe infant foot problems are common and are often incorrectly called clubfoot.

Stretching and casting.  Treatment should begin right away to have the best chance for a successful outcome without the need for surgery.  Over the past 5 to 10 years, success has been achieved in correcting clubfeet without the need for surgery.  A particular method of stretching and casting, known as the Ponseti method, has been responsible for this.  With this method, the doctor changes the cast every week for several weeks, always stretching the foot toward the correct position.  The heel cord is then released followed by one more cast for three weeks.  Once the foot has been corrected, the infant must wear a brace at night for two years to maintain the correction.  This has been extremely effective but requires the parents to actively participate in the daily care by applying the braces.  Without the parents’ participation, the deformity will likely recur because the muscles around the foot can recreate the abnormal position.

The goal of our treatment program, is to provide a functional, painless, and stable lower extremity for your newborn by the time he or she is ready to walk.  (Note: Anytime your baby wears a cast, watch for changes in skin color or temperature that may indicate problems with circulation.)

On occasion, stretching, casting and bracing will not correct a clubfoot deformity.  Surgery may be needed to adjust the tendons, ligaments and joints in the foot and ankle.  Usually done at 9 to 12 months of age, surgery corrects all of your child’s clubfoot deformities at the same time.  After surgery, a cast holds the corrected position while healing continues.  Recurrence of clubfoot deformity is still possible, thus special shoes or braces will likely be used up to a year after surgery.